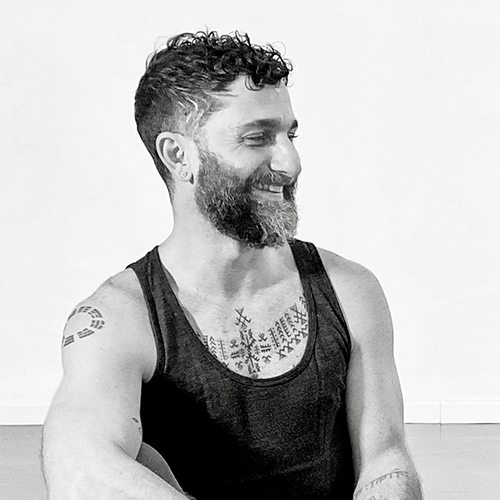 Marco was born in Milan in 1976. He studied art at the Brera Academy and began working in the field of communication. He approached yoga in 2000 but only in 2005 he committed himself to practice while he was living in Barcelona and he started a deep and passionate daily dialogue with the practice. After his first training in 2009, he returned to Milan where he began to teach vinyasa yoga and in 2012 he founded [hohm] street yoga

His mentors are Biff Mithoefer, with whom he deepened the study of Yin Yoga and Taoism; Prema Mayi, who introduced him on the path of Bhakti Yoga; and finally Abbie Galvin and Nevine Michaan, thanks to whom he discovered and now carries on the study of the Katonah Yoga method, which combines hatha yoga, functionality, Chinese medicine and syncretism.

“My research in the path of yoga is constant and a-dogmatic, because I believe that this discipline is a practical tool that everyone can benefit from in everyday and especially metropolitan life. Yoga helps us to function better on a physical level and consequently to live better and be happier ”.