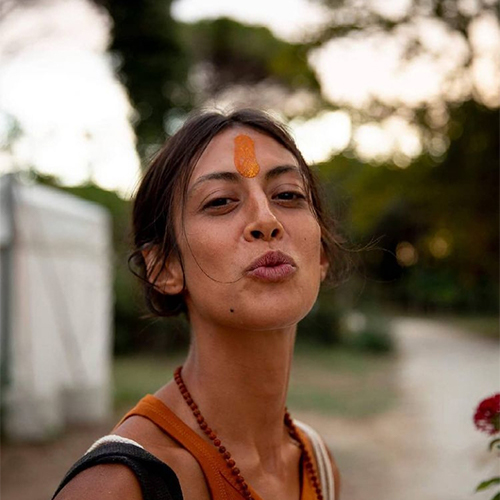 Noemi Pellicciari, Bologna, born in 1988.
Interested in Yoga since adolescence, after the first studies of Oriental History and Civilization in Bologna, in 2010 she received a first spiritual initiation by the Juna Akhara, a Shivaite monastic order.
In 2012, after a long trip to India, she moved to the Faculty of Modern Literature and continued her professional training as an actress, contemporary dancer, starting to work as an interpreter and creator.
In 2020, he undertakes professional training as a yoga teacher at Kutir, discovering that he has a natural vocation to teach as a devotional service, finding fertile ground for expression for his empathic and creative nature, placed at the service of collective well-being.

JOYFUL BODY – A workshop of conscious and expressive movement, for the expansion of the body’s consciousness in its joyful presence.
JOYFUL BODY wants to create an intimate and shared dimension at the same time, of conscious and expressive movement, in which we will use somatic and practical exercises coming from the integrated languages ​​of contemporary dance, theater and yoga, as tools for physical and perceptive exploration; the five senses, the relationship with natural space, time, sound and voice, will be our vehicles for an ascending journey of listening and self-perception, for a liberation of the body in motion in the experience of its original joy and shared.