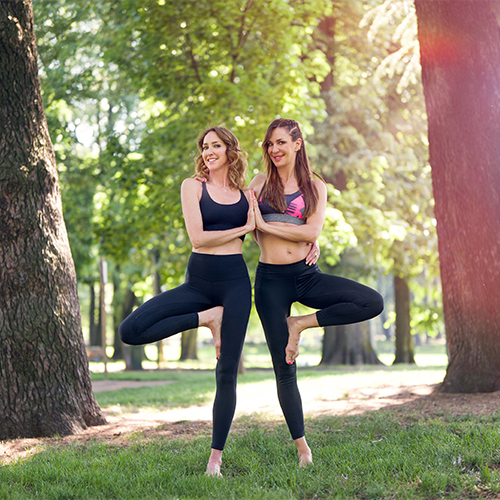 Kris Reichert, Canadian from Toronto, at the end of the specialization in literature and theater, decides to travel across Europe to get to know different cultures, working and learning languages. After various stages and experiences, she finds herself in Italy for love and starts working as a model.
Kris Grove, an American from Indianapolis, arrives in Italy at the age of eighteen to spend a summer in Florence where she cultivates her love for art. He then decides to enroll in the D.A.M.S. . He returns to America for a short period during which he graduates, until the call of Italy becomes irresistible. She then began modeling and settled in Bologna.
They started working in 1998 as presenters in various programs on music, cultural trends and fashion, presenting programs on MTV, Rai and Mediaset, including Sanremo and Festival Bar. In the meantime, they throw themselves into their strongest passion: making music! Both released a total of 4 discs over the years.
From TV, they go to radio and in 2005 they become part of the beautiful family of RADIO 105 as radio speakers.
Currently, the two North Americans are faithfully broadcasting their new program, “Kris & Love”, dedicated to positivity and fun every weekend on Radio 105.