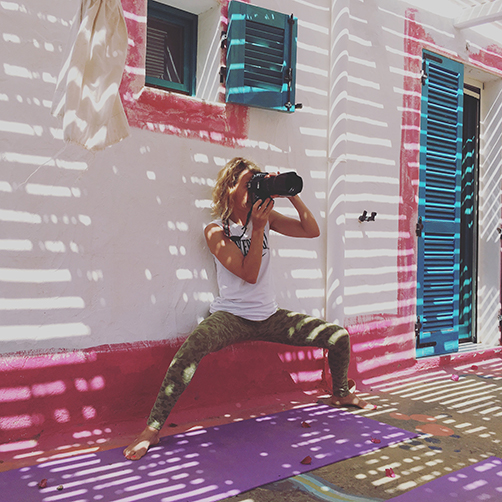 After getting a degree in Photography from the Ecole Nationale Supérieure des Arts Décoratifs de Paris, and studying Indian Art History at the Sorbonne, Julie Ansiau, french photographer born in 1970, won the World Press Photo Joop Swart Masterclass, assisted Nan Goldin in her parisian studio and started working as a free lance for French and Japanese media, such as ELLE France, Vogue Bambini, Figaro Madame Japon, Cosmopolitan, Grazia France, Harper’s Bazaar Japan… She also works as a photographer and art director for various brands in France and abroad. She started her Yoga journey in 1991, when she came back from Bologna where she had been living for a year. She practices Vinyasa, Kundalini, Ashtanga, and her very favorite sadhana, Iyengar Yoga. Her teachers are Eric Depoil in Paris, Stefano Bendandi, Sri HS Arun & Dr Abhay Keste in India. Those past years she has started a musical journey with Bhakti artist Maha Dev OK. Today she still works as a photographer bu she also sings in a bhakti band and plays the harmonium, leading kirtans in Paris and bhakti workshops abroad on yoga retreats.