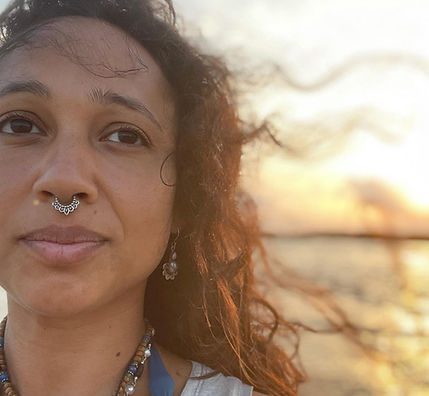 Jahnava Sundari has been studying and teaching yoga since 2006.
Half Indian, half Italian, she lived in India until the age of 11.
She approached the practice of Bhakti yoga at the age of 18 and since then she has lived in countless ashrams in Europe, India and America, practicing an intense spiritual life.
She has actively engaged in guiding people into a healthy and spiritual lifestyle through the practice of yoga.

Jahnava was trained in the science of yoga and Ayurveda in India. She has specialized as a yoga therapist, Vinyasa Yoga teacher, Preparto Yoga, Chakra Yoga and Indian classical music.

Since 2008 she has conducted courses, seminars, conferences and retreats in various parts of the world: Atlanta, New York, Dallas, London, Italy, Belgium, Croatia, Germany and India. She graduated in Vaisnava Theology from the University of Chester (UK).
He conducts Yoga Alliance accredited 250 and 300 hour training courses, 7 day chakra retreats and pilgrimages to India.