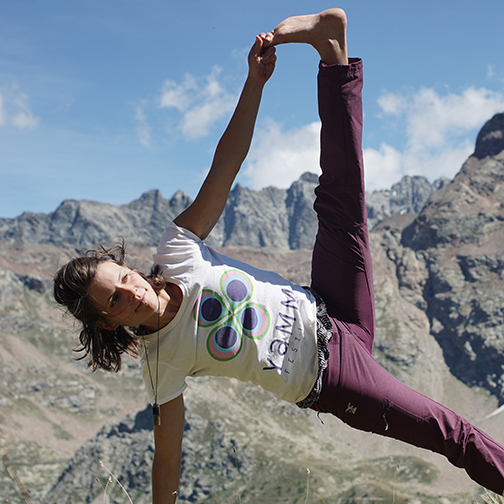 Alessandra discovers the world of Yoga in 2012 in Bologna and was immediately captured by it.
Her first encounter was with the Parinama Hatha Yoga style, Bruno Baleotti method.
Her immediately regular practice has been enriched by experimenting with different styles, driven by the curiousity to discover all that this discipline has to offer.
Parallel to the discipline of Yoga, she begins to practice slackline and highline, a mix of inner and physical balacing blended with breath control, meditation and love for nature; just like in yoga.
She is part of the Slackline Bologna crew, a collective with which she organizes highline festivals in northern Italy.

At the end of 2017 she found her dimension at Kutir asd Yoga Studio, “Piccolo Ashram” in Bologna where he began to practice Akhanda Yoga. In 2020 she completed the two-year Teacher Training program at the aforementioned school.