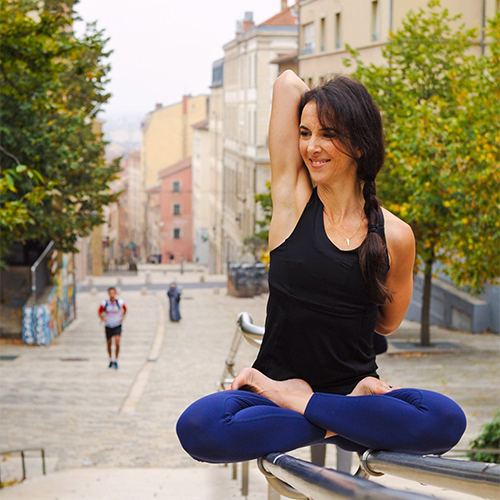 Vanessa De Hass, co-founder of O Yoga studio in Lyon, Originally from Las Vegas. She was able to see the benefits that Yoga, Ayurveda and Meditation brought to her life from a young age, thanks to her Mother.
It was during her studies she became more interested in the mind body connection and worked with Buddhist Psychologist Dr. Steve Hayes on Acceptance and Commitment Therapy where Buddhist and Yogic principles are implemented to help those with drug addiction. After many years of practicing Ashtanga Yoga, in 2007 she travelled to India to study AkHanda Yoga with Yogrishi Vishvaketu at his Ashram. She has since continued to study with many mentors and experts in Vinyasa, Yoga Anatomy, Ayurveda, Chinese Medicine and Reiki. She believes conscious movement is medicine.
Her classes are strengthbased with an aim to be therapeutic, and explore various types of moment, leaving practitioners with tools to implement in any type of Yoga practice as well as in everyday life.

Mandala Flow (Vinyasa)
Wxplore the spiral patterns of nature in this Mandala Vinyasa class. As there is never perfection nor straight lines in nature we will explore freedom in moving our bodies in many different ways and directions, 360 degrees around the mat. A regular Vinyasa practice is recommended for attending this class.