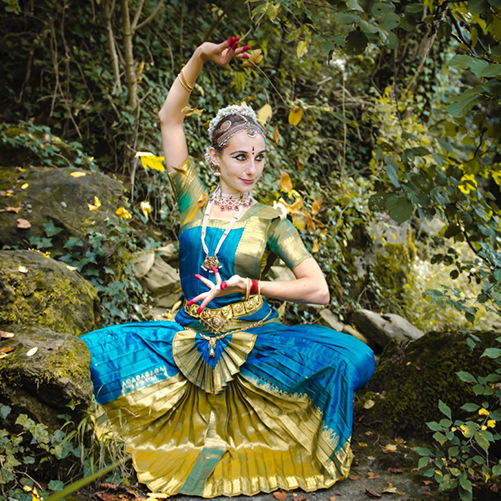 Giuditta de Concini, dancer and teacher, since 1996, in 2002 she started studying the Bharatanāṭyam dance in Italy with Nuria Sala Grau. He deepens his study with Indian masters through long stays in India. Since 2009 she collaborates with the Department of Music and Entertainment of the University of Bologna where she annually holds some lessons / shows on the dance theater of South India. In 2012, together with 3 formidable companions, she founded Associazione Jaya (www.associazionejaya.it) , of which she is president, and with whom she organizes courses, seminars and events related to Indian culture with a particular focus on gender issues.

• MĀYŪRA BAKHTI
performance of Indian dance theater Bharatanāṭyam style with Giuditta de Concini
An ancient Hindu saying tells that ‘Mayūra has angel feathers, a devil’s voice and the walk of a thief’.
The peacock can represent the cosmos, the sky, the circle, the sun or the moon, but also the starry sky: the fan is the celestial vault, and the thousand eyes on the feathers, the stars.
We will meet this fascinating feathered animal, and the deities with which it is associated – Krishna, Muruga, the Goddess – in as many pieces of the traditional Bharatanāṭyam repertoire. In this flight through Hindu mythology, we will be able to feel how Mayūra is both the object and vehicle of Bakthi, the deepest devotion.
Duration of the show 50 min

• INTRODUCTION TO BHARATANĀṬYAM – SACRED DANCE WORKSHOP
Bharatanāṭyam is an ancient form of sacred dance theater originating from Tamil Nadu, in southern India. Through the practice of this wonderful form of yoga in motion, you can represent everything, ‘talking’ with your hands and dancing with your eyes, to tell stories of gods, animals and heroes.
At the center of the practice will be the alignment, the geometry of the lines of the body and the rhythmic richness, the gestural language (mudrā) and the facial expressions (abhinaya).
Every day we will practice namaskār and śloka (greeting to the earth and invocation), physical preparation, adavu (basic technique) and combinations of adavu, hasta mudrā (hand gestures and poetic composition) and completion of the āngika abhinaya (movements of the eyes, neck , head).
The focus of this practice will be Bakhti Rasa.